The National Embarrassment of Veteran Unemployment: A Call for Mature Thought Leadership

President Obama’s recent announcement that all but a small contingent of Marines would be withdrawn from Iraq by Christmas, 2011, was no doubt welcome news for the families of servicemen and women currently deployed. I suspect the news was equally well received by the families of Warriors undergoing pre-deployment training to deploy to Iraq during the remainder of 2011 and 2012. No matter which side of the ongoing grand strategy debate one adopts – whether wise or unwise to withdraw from Iraq, the realities of the national Veteran unemployment rate should give every American pause.

In spite of much public and private sector discussion of the public shame wrought by high veteran unemployment, especially for those who have borne the brunt of the last ten years of combat, a simple failure on the part of potential employers contributes to the national dilemma. The failure is one of mature thought leadership.

Recently, I was engaged in discussions with Human Resource professionals representing one of our Fortune 100 companies proclaiming the desire to hire approximately one thousand veterans. “Easy!” Or so I thought. What quickly became clear was the unwillingness of this potential early adopter and national leader to consider the employment value of broad leadership and problem-solving experiences commonplace across today’s force. Senior HR professionals sought the perfect round peg (education, technical certificates, minimum levels of practical experience, etc.) to place the round hole – no exceptions. Even after an emotion-filled appeal to the high degree of adaptability and trainability of today’s Warrior veteran, the cookie cutter solution prevailed. After two years as a strategic human capital consultant, and multiple interactions with HR professionals as well as CEOs of potential employers of post 9/11 Warriors, the refrain varies a little from one employer to the next; however, the message remains the same.

Until CEOs intervene from a position of mature thought leadership to cause corporate hiring strategies to “trump” narrow and formulaic thinking in human resource departments, the trends we observe in veteran unemployment will continue. Mr. Wesley Poriotis, Founder of Veterans Across America (VAA) (http://www.veteransacrossamerica.org) and co-author of the 2007 study, Enhancing Veterans Employment Prospects in the Private Sector (Final Branding Report and Recommendations) has had success in changing the corporate paradigm. Wes passionately notes the underrepresentation of Guard and Reserve member unemployment in national estimates, while calling attention to the underemployment dilemma confronting veterans of all components.

Among VAA successes are stories of young former enlisted vets who are recruited into management training programs at CBS and NBC. Yet, even Wes laments the persistent myopia that prevails. Paraphrasing Wes Poriotis, where would our nation be today if such attitudes concerning veteran hiring (qualifications) had prevailed at the conclusion of World War I or World War II? In response to Wes and, in closing, I ask a different, yet related question. How viable will our All Volunteer Force be in the years ahead should this narrow and far too formulaic approach to veteran hiring (qualifications) and the accompanying high veteran unemployment persist? The answer to Wes Poriotis’ hypothetical question has been eclipsed by history. The answer to my question has yet to be written. With mature thought leadership from C suites it is not too late to render my question equally moot.

"Twit-Bits" from the Coach's Corner 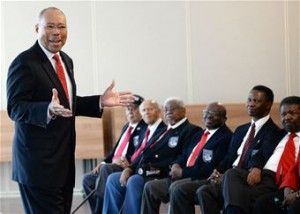 On April 21, 2016, members of the Hanscom Air Force Base community gathered at the Massachusetts National Guard Headquarters to celebrate the 75th anniversary of